If you read my book Running the Dream: One Summer Living, Training, and Racing with a Team of World-Class Runners Half My Age and found yourself wondering what happened on the days not included in the journal-style narrative, here’s your answer! Sort of. What follows is a chapter I wrote for inclusion in the book but eliminated in a late effort to reduce the book’s heft. Enjoy!

Like many people, I eat lunch every day. Most days, it’s just lunch. Today, though, it was an experience. The food itself had almost nothing to do with the meal’s specialness, the company and setting almost everything.

My companions in bread breaking were four members of the Sonoran Distance Project, a team of sub-elite female runners who share a goal of qualifying for the U.S. Olympic Trials Marathon, and their coach, John Reich, himself a former sub-elite runner; the location a remote cabin in the woods where John hosts the team’s annual summer training camp (a three-day affair, as most of the roster works full-time in jobs completely unrelated to running). The invitation to drop in on the group’s midday repast came about when John, having read one or two of my books, learned I was coming to Flagstaff and got my contact info from Coach Ben (everyone knowing everyone in the local running community).

Warned by John not to bother with Google maps, I drove to the cabin with printed directions resting on my lap, a highly descriptive set of cues (“At about 6.5 miles into the forest the good gravel will turn right but you will continue straight”) I received from him via email. It was slow going, and rather unkind to the Fun Mobile in certain sections, but eventually I did reach Elk Park meadows, an off-the-grid settlement of rough-hewn houses and glorified huts strewn across a gash-shaped clearing enclosed by pristine forest little changed since white men first laid eyes on it. The very last line of John’s document instructed me to look for the “Reich” sign on Raccoon Drive. Seeing it, I veered left onto a narrow drive, passing a pair of catatonic horses, heads hanging over a slatted fence, before parking beside three or four cars lined up against a second fence marking the perimeter of the front yard of a squat cabin. John met me at the gate.

“Any trouble finding us?” he asked, eyeing the mud-spattered Mazda.

John ushered me into the yard and introduced me to the runners. Natalie Cuomo, a medical student in Phoenix with a marathon PR of 2:48:08, established herself as the group’s extrovert, stepping forward with a winsome smile and an extended hand. Autumn Ray, an emergency medical physician in Phoenix who competed in the 2016 Olympic Trials, said something nice about my most recent book. Tanaya Gallagher, a bespectacled massage therapist and yoga instructor from Sedona who’s into meditation and recycling, fended me off with a wave, as though she had a cold she didn’t want to pass on to me. And, lastly, Amy Cole, who lives in Tucson and has a PhD in psychology, greeted me with a look of incipient hilarity that made me wonder if my fly was open. 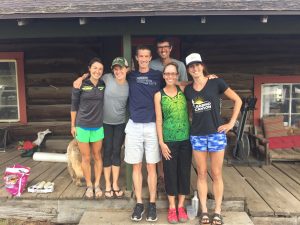 John handed me a bottle of water and invited me to sit on a camp chair facing the house. The others arranged themselves in a loose circle around me, Autumn and John in low chairs to my left, Natalie on the porch (where she massaged her legs with a medieval-looking device made by Roll Recovery), Amy in a beach chair on my right side, and to her left, prostrate on a yoga mat, Tanaya, whose husband, Josh Esquivel, knelt on the grass beside her.

I sat back in my seat and exhaled hugely, soaking in the primordial serenity of my surroundings. The air was warm and dry, stirred by a gentle breeze out of the northeast that carried on it a hint of the sweet fragrance of ponderosa pines. A broad-winged bird of prey glided far overheard, perhaps interested in the deer femur currently being gnawed at by one of five dogs lazing about the lawn. A vast silence surrounded us.

“Shall we go inside and watch TV?” I joked.

“There is no TV,” John said. “No electricity, either.”

I remembered suddenly a famous quote from the great American miler Marty Liquori:

“You’ve got to be a little bored to be doing really good training.”

The runners proceeded to grill me about my fake pro runner experience, their curiosity—like my friend Teresa’s—tinged with envy. August asked me, half-serious, if I’d gotten any good dirt on the team. I told her they’d been on their best behavior so far, wondering even as I spoke if this might actually be true—if things weren’t as perfect as they seemed within NAZ Elite. Amy followed up with a question about whether I felt accepted by my new teammates, and I told her I did.

“Take today’s workout,” I said. “I had sixteen miles with an eight-mile cutdown from 7:10 to 6:20. Ben Bruce, who’s coming back from an abdominal strain, paced me through most of the cutdown, and it was his idea; I didn’t even ask.”

“Here’s something I’m curious about,” John said, and we all turned to him. “You intend to write about this experience, correct?”

“What happens if you have a bad race in Chicago? That wouldn’t make a very good ending to your story.”

I reminded John that George Plimpton experienced a similar letdown in the process of creating Paper Lion. The climax of his story was supposed to have been the moment he came off the bench to play a full set of downs as quarterback of the Detroit Lions in a preseason matchup against the New York Giants, but at the last minute his coach decided against putting him in. Nevertheless, Plimpton’s book sold a million copies and became a hit movie, starring the author as himself.

“He couldn’t have known that at the time, though,” John countered. “He must have been shitting his pants when it happened.”

“And I will shit my pants if I run poorly in Chicago,” I conceded.

“Are you ready for some lunch?” Tanaya asked.

It was the custom of the runners of the Sonoran Distance Project to take turns preparing meals, and today’s chef was Tanaya. Having come to Elk Park Meadows with the expectation of feasting on something like grilled chicken breasts, a mixed greens salad, and couscous, I was instead given a choice between peanut butter and jelly and grilled cheese. I chose PB&J.

“Seriously, though,” I said while I chewed, “what the hell do you all do around here? Where’s the zip-line?”

“What?” Tanaya said, incredulous. “Why not?”

“Whenever I nap, I feel sluggish the rest of the day. I never recover.”

Cowed by the vehemence of these objections, I promised I would nap. And then I turned the tables.

“What about you guys?” I asked. “You’re all busy professionals chasing the dream. It must be hard to give your running the attention and space you’d like to. Do you ever wish you could run full-time—to have this training camp lifestyle be your everyday lifestyle?”

“Yes, definitely,” Amy said. “The simple life of run, eat, sleep, repeat is very appealing to me. I’m not one who thrives on being busy.”

“I love my time at the cabin,” Autumn seconded. “When all there is to do is sleep and read, you actually get enough rest. Otherwise I find all sorts of useless chores to do. In my experience, both your brain and your body need the rest.”

Aware now that I was keeping the women from their hammocks, or whatever the hell they slept on in this odd Xanadu, I rose to leave. During the long drive back to Matt’s house I pictured my new friends packing up tomorrow to return to their normal lives. A quick bit of mental arithmetic revealed to me that in 78 days, I will do the same. From one perspective, this seems like a long time; from another, as brief as a pleasant dream in an afternoon nap.