I’ve been rubbernecking lately at a Twitter debate between scientific experts on human metabolism and obesity, on one side, and keto diet advocates on the other. The spectacle is both entertaining and tedious, and also revealing. What I’ve realized in observing it is that even I knew nothing about human metabolism and obesity, I would come down on the same side of the debate I’m already on based on what I do know—the scientific side—based instead on my judgment of the credibility of the two factions.

Those representing the scientific side, including NIH senior investigator Kevin Hall, PhD, and The Hungry Brain author Stephan Guyenet, PhD, are impressive communicators—dispassionate, precise, and careful. The keto faction, meanwhile, whose frontline warriors include journalist Gary Taubes and The Big Fat Lie author Nina Teicholz, communicate with a mixture of sweeping generalizations, emotionally overheated language, and bug-eyed conspiracy mongering that could scarcely paint a starker contrast to their opponents. It is so glaringly obviously that the keto defenders want to believe what they believe, and that the scientists believe what the evidence persuades them to believe, that—again, supposing I knew nothing at all about the substance of the debate—I would judge it highly likely that the keto crowd was wrong and the scientists right by style alone.

Elsewhere I have written about carbophobia, or fear of carbs. Today I’ve got a new one for you: miscarbohy, or hatred of carbohydrate. It sounds silly, but millions of everyday folks, including a great many endurance athletes, are infected with this prejudice. Like other prejudices, miscarbohy leads people to do irrational, and sometimes even self-sabotaging, things. For example, it causes a lot of ultrarunners to restrict their carbohydrate intake during races and to reflexively scapegoat carbs when they experience GI distress during competition. 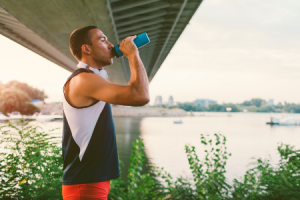 A new scientific review led by Soledad Arribalzaga of the University of Leon shows just how self-sabotaging these particularly manifestations of miscarbohy are. Arrizabalzaga’s team searched the literature for past studies that had tracked measures of fatigue and gastrointestinal distress among runners competing in ultradistance trail events. They found 25 relevant studies, nine of which satisfied their inclusion criteria. Carbohydrate intake rates varied widely between individuals in all of these studies, but all found that only a small minority of runners met the recommended intake level of 90 grams per hour. According to Arrizalbaga and her colleagues, “The main reasons why athletes referred to this complication regarding [carbohydrate] intake were as follows:

Gastrointestinal complaints were indeed common, affecting between 45 and 75 of participants in the various studies. However, the likelihood of experiencing debilitating symptoms was found to be linked not to the amount of carbohydrate consumed but rather to other factors including speed (faster runners being 2.5 times more likely than slower runners to have GI problems) and elevation. What’s more, a couple of the included studies reported that runners who had previously engaged in gut training (i.e., practicing higher levels of carbohydrate intake during training) experienced fewer GI symptoms. These runners gained a significant advantage from refusing to take “no” for an answer from their intestines, as the most consistent finding among the nine studies analyzed was that the runners who consumed the highest amounts of carbohydrate exhibited the lowest fatigue levels across all measures, from subjective ratings of perceived exertion to blood levels of creatine kinase.

In my experience, the practical difficulty of meeting recommended carbohydrate levels and the GI issues that sometimes attend higher intake levels are not the only reasons ultrarunners and other endurance athletes don’t consume enough carbs during competition. Another is miscarbohy, which prevents runners who are biased against carbohydrate from even trying to take in enough. Prejudice is such a funny thing. If some other nutrient were discovered that offered precisely the same mix of pros and cons as carbohydrate in the context of endurance racing, anti-carb athletes would be all over it. As it is, however, no amount of evidence or reasoning can persuade the majority of these athletes to overcome their double standard and stop sabotaging themselves in races by taking in more carbs.

Chances are this article is being read by some athletes who have an anti-carb prejudice and some who don’t. Members of both groups, according to the review just described, tend not to consume enough carbohydrate during long races. The best way to punish miscarbohy that I can think of is for those athletes who aren’t biased against carbs yet do not consume enough carbs in competition to increase their carb intake and kick the asses of the biased.