In the 1990s, philosophers Andy Clark and David Chalmers introduced the concept of extended mind, which proposes that the acts of thinking and feeling do not occur entirely inside one’s head. If you’re not familiar with this concept, it might sound plumb crazy to you, but if you give it a chance, you’ll see it actually makes a lot of sense.

The operative mechanism in this example is cognitive outsourcing, or offloading a task from the brain to an external tool. Our capacity to outsource mental work, and some of the specific ways we do, have both advantages and disadvantages. I’ve hinted already at the advantages. One disadvantage is the use-it-or-lose-it factor. Take spell check, for example. My father and I, both experienced professional writers, have shared the observation that we’ve become worse spellers since the advent of spell check. We no longer have to remember how to spell, so we’ve forgotten to a degree.

As a coach, I see smart watches and other sports trackers doing something similar with respect to athletes’ ability to pace themselves. Earlier this year, I wrote about a study by a pair of Italian psychologists on device dependency in runners. In a sample of 111 athletes, these researchers observed a high level of device dependency among less experienced runners in particular. While this particular study did not delve into the practical consequences of such dependence, a new study conducted by Dutch researchers and published in the journal Sensors does.

The purpose of the experiment, as stated in the abstract, was “to explore the roles that sports trackers and running-related data play in runners’ personal goal achievement.” The subjects were 22 competitive recreational runners recruited through Strava and other online platforms. The researchers collected information about their experiences with sports trackers through a combination of interviews and diaries. Their unsurprising main finding was that the devices were used for the primary purpose of logging data for later review—a classic example of cognitive outsourcing.

Sports trackers were also broadly relied on for the regulation of pace during runs, and here’s where the problems came in. A majority of the runners reported that the devices failed to supply enough contextual guidance to allow them to completely turn over control and run on the ambulatory equivalent of autopilot. At the same time, though, in relying on their devices to a certain degree to tell them how they were doing and what to do, the runners sacrificed the self-reliance they would have needed to maintain consistent control in their relationship with their devices—unless they ignored them altogether, which in fact is exactly how some chose to resolve the conflict. “I feel horrible when seeing that I am not keeping up with a pace that I planned,” one runner said, “so I start thinking if I should push myself harder on the next kilometer or punish myself by running slow . . . So you just avoid looking at it at all and check once you’re done because it influences me in the wrong way . . . It’s just not that helpful, is it?” 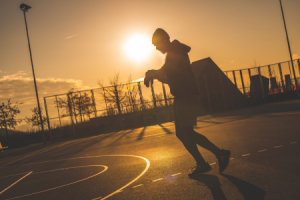 The authors concluded their report of their findings by recommending improvements to sports trackers’ design and functionality. “We propose that technology developers should be aware of the psychological effects of running-related data on runners,” they wrote. “Future research could examine how sports technology facilitates ignorance of data while still informing the runner that some data are important to track and be aware of, especially when these data are of considerable importance because they relate to their goals.”

I like this direction. Sports trackers are not intrinsically helpful or harmful to athletes, but they have the potential to be both, and existing products very much are both for many athletes. The athletes who use their devices most effectively are those who remain in total control of all pacing-related decision-making, relying on them merely as a source of data that informs their choices. For them, sports trackers serve as a sensible and selectively used extension of their minds. For too many other athletes, alas, sports trackers are being used as an outright substitute for their minds, which no amount of advancement in design and functionality will ever allow them to truly be.

My new book, On Pace: Discover How to Run Every Race at Your Real Limit will guide you step by step toward pacing mastery. Click here for a free sample chapter of On Pace, and here to purchase a copy.

All Training Plans and Bundles!

Use coupon codes at checkout

Sale excludes subscription products, sale limited to one coupon code use per code per customer