Do Big Workouts Make You Nervous? | 80/20 Endurance Skip to content

Raise your hand if you’ve ever gotten nervous before a big workout.

Whoa, that’s a lot of hands! I guess it’s a universal experience.

Here’s another question: Why do big workouts make you nervous?

Chances are it’s for one of two reasons: Either you fear the suffering you anticipate experiencing during the workout or you fear failure. The first of these reasons is natural and healthy. Some of the greatest champions get nervous when they know they’re headed deep into the pain cave in training. The second reason is equally natural but not healthy. By and large, the most successful athletes don’t suffer from performance anxiety before workouts—and that is what we’re talking about here: performance anxiety.

Also referred to as stage fright, performance anxiety is defined by Good Therapy as “fear about one’s ability to perform a task.” I’ve seen it in a number of athletes I’ve worked with over the years, and I find the phenomenon both strange and interesting. To me it almost seems as if these poor folks are projecting an “OR ELSE!” onto the performance standards I give them in workouts.

I know this looks kind of funny, but I’m being 100 percent honest when I say that some athletes behave as if those two threatening all-caps words are really there in my workout descriptions. They worry for hours, sometimes days, before the workout, and if, heaven forbid, they fall short of the times I’ve given them, they are deeply shaken. It’s as though their inability to hit one or more of those numbers brings down upon them some kind of final judgment on their total being.

Here lies Joe Smith, who missed his time in the final rep by two seconds.

Most of the online writeups on performance anxiety you’ll find on the internet stress how common the phenomenon is, and in so doing they gloss over the fact that not everyone experiences it. So what’s different about those who do? The bad news here is that anxiety of all forms has genetic underpinnings. Worse, studies have shown that athletes who possess high numbers of “anxiety genes” don’t perform as well in competition. The sad irony is that no actor is more likely to go onstage and bomb than one who’s terrified of doing just that.

Low self-esteem also predisposes people to performance anxiety. It makes sense, right? Individuals with low self-esteem worry a lot about failing to measure up. Consequently, anything they do that could possibly be used to evaluate their worth is likely to cause anxiety. Low self-esteem doesn’t come from nowhere; it typically comes about through a process of internalizing negative judgments imposed upon the individual during childhood by parents and others whose good opinion is important to the individual. Sadly, sports are often used by unskillful parents and coaches as a measuring stick of overall worth in young people, which carries lifelong consequences. All too often, when an athlete looks ahead to a big workout with dread it’s because, on some level, they fear that performing poorly will prove they are a worthless human being. 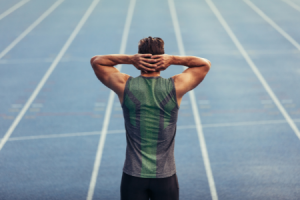 That’s pretty heavy stuff for a lowly endurance coach like me to deal with, but I enjoy doing so. It’s beyond my pay grade to work on building self-esteem, but there are a couple of coaching tools that I have found useful in helping athletes overcome workout-related performance anxiety. One of these is switching from performance-based metrics such as pace and power to other metrics such as perceived effort and estimated time limit. For example, instead of asking a runner to run at their lactate threshold pace, I might instead ask them to run at RPE 6 or at their perceived one-hour max pace. More often than not, athletes who do these alternative workouts perform at just as high a level as they would in standard workouts but without the anxiety.

When this time comes, I make it very clear to the athlete that they must not project onto me the “OR ELSE!” they attach to the performance targets I give them. I personally couldn’t care less if they hit their marks. If an athlete wants to impress me, they can do so by executing the workout with good effort and good judgment. They simply cannot impress me with their performance itself.

No matter how clearly or how often I communicate this message, it takes a while for athletes to start believing it. The roots of performance anxiety run deep and cannot be choked off by a single pep talk from their coach. But I have found that if I keep hammering this message over and over, athletes do slowly shift from a self-sabotaging focus on outcomes toward a healthy focus on the process.

If you’re self-coached, this shift might be more difficult to effect, as it requires deep and sustained self-reflection. Ask yourself the following sequence of questions:

Do I get really nervous before big workouts?

Is it a fear of failure in particular that I’m experiencing?

Am I attaching an “or else” to my performance targets?

Where does that “or else” come from?

What are the real consequences of not meeting my performance targets?

What would happen if I continued to try to hit my targets but stopped caring whether I actually succeed?

I’ll answer this last one for you: You’d no longer get nervous before big workouts!